What Is
Radiation Damage? ➜

How Long Does It Take to Recover From Radiation Damage? ➜

What Is Radiation Damage?

Radiation therapy is used to treat tumors of all types, from tumors in the brain to those in the breast, prostate, uterus and gastrointestinal tract. Although radiation therapy is becoming more accurate and more successful in the treatment of cancer, there is still the potential that normal tissue is damaged in the process. This is called radiation damage, which may have a significant negative impact on a patient's quality of life.

Acute radiation injury—damage that occurs right after treatment—usually heals with effective medical care, which may include antibiotics and blood transfusions. On the other hand, delayed radiation injury—damage that occurs at least six months after radiation treatment—tends to be more difficult to diagnose, and therefore, treat. A radiation oncologist or any other medical professional (i.e., primary care physician, plastic surgeon, dentist, etc.) may have trouble connecting the symptoms back to radiation therapy due to the amount of time in between the patient receiving radiation treatment and symptom onset. In fact, there are some instances in which warning signs don’t arise until many years after the initial treatment, which makes diagnosing delayed radiation injury even more of a challenge.

For example, Dr. Henry Prince, MD, chief medical officer at Hyperbaric Medical Solutions (HMS), points out that people who received radiation treatment for prostate cancer, which targets the pelvis, may experience health issues five, 10, or even 30-plus years down the road, such as blood in their urine—a condition known as hematuria. Because the symptom doesn’t occur right after they finish treatment, Dr. Prince shares, "Patients, and often their doctors, are likely to think of almost everything except radiation as being the cause."

These symptoms often vary, depending on the type of cancer a patient had, and thus, the area treated.

Here are some examples:

Many women have surgical reconstruction after a mastectomy and radiation therapy. These women are at higher risk of post-operative complications due to poor circulation in the radiated area. Some women even develop open sores on their chest that will not heal and their skin may show signs of redness and/or irritation.

Individuals experience open sores, multiple caries or fractures of the jaw, as well as other muscle or skin issues. They may also have trouble swallowing and/or difficulty moving their neck.

Those who underwent radiation treatment for brain cancer could possibly notice personality, memory and/or language changes. Numbness and tingling, balance issues, loss of bowel or bladder function and weakness of the arms or legs may also be present.

Radiation injury destroys blood vessels, depletes tissue of the stem cells that keep it healthy, and causes scarring/fibrosis. Hyperbaric oxygen therapy (HBOT), a non-invasive, natural treatment that heals the body from the inside out, is FDA-approved for delayed radiation injury because it can reverse the detrimental effects of radiation damage.

An HBOT session, which takes place in a controlled environment overseen by a trained physician, physician assistant or technician, drives 10 to 14 times more oxygen into the blood stream at increase atmospheric pressure. This oxygen stimulus signals the body to regenerate blood vessels in the damaged tissue. It also has the ability to promote stem cell growth, decrease inflammation in the affected area(s), reduce scarring and strengthen the immune system.

As Dr. Prince states, “The production of new blood vessels and the release of stem cells helps to heal delayed radiation injury.”

In fact, the results of a 2013 study, titled “Hyperbaric Oxygen Treatment in Radiation-Induced Cystitis and Proctitis: A Prospective Cohort Study on Patient-Perceived Quality of Recovery,” demonstrate how HBOT is an effective and safe treatment strategy for late radiation therapy-induced soft-tissue injuries in the pelvic region.

Participants—all of whom underwent radiation therapy prostate or rectal cancer—received HBOT an average of 36 sessions. During each session, they were "delivered 100% oxygen for 90 minutes at 2.0 to 2.4 atmospheres (ATA)."

How Long Does It Take to Recover From Radiation Damage?

With the help of HBOT, a patient who responds well to treatment and follows the schedule recommended by his or her medical provider can heal from radiation damage in three to eight weeks, on average. 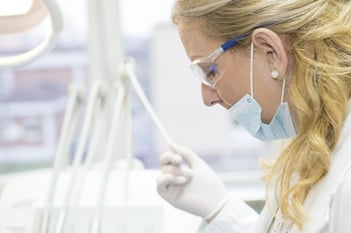 However, keep in mind that each case is different. There are several factors that affect the amount of time it will take to recover, including:

HMS medical director Dr. Alan Katz, MD, FACEP, FAAEM, UHM/ABEM, shares that patients usually start to notice a change in their condition at the “12- to 15-treatment mark.” Again, this goes on a case-by-case basis, depending on a patient's symptoms and his or her initial response to treatment.

Dr. Katz adds that patients are advised to receive HBOT five days a week and "usually require a minimum of 40 treatments" to maximize their results.

At HMS, we want to share our enthusiasm and knowledge for this extraordinary technology that has the ability to help individuals in their healing and recovery process, creating life-changing results.

Call our office today at (516) 762-8840 or click the button to Get Started with Hyperbaric Oxygen Therapy and learn how it can help you accelerate healing and achieve optimal health!